In very basic terms, it’s guiding your dog around a series of obstacles (usually 18 to 20 when competing), where the course is set by a judge.

Your dog must work off lead and cannot be touched while ‘under test’. Your dog is guided by using both verbal and physical (hand signals, body position) cues.

Not only must you teach your dog to safely and correctly complete all the different obstacles, you need to be able to steer (handle) them using verbal and physical cues, so they go in the right direction and take the quickest line between the obstacles in order to complete the course in the fastest possible time.

Dog agility started life in 1978 when it was showcased as a demonstration at Crufts on Friday 10 February 1978. It was put on as entertainment in the main ring, between the Obedience and Breed competitions.

Two teams of four dogs plus one reserve each arrived at Crufts Dog Show 1978. They were the Lincolnshire Alsatian Association & All Breeds Training Society, and the Yorkshire Working Trials Training Society. The handlers wore smart tracksuits as a team uniform and competed against each other with great success.

This is a video of the first demonstration of agility at Crufts in 1978. The equipment will make you cringe! First Crufts Dog Agility 1978

In 1979, after qualifying rounds, three teams competed in the finals at Crufts. The teams were the Pontefract Dog Training Club, The Rugby Dog Training Club and The Yorkshire Working Trials Society.

A further Agility milestone was reached when the finals of the Pedigree Chum Agility Stakes were held at the International Horse Show at Olympia during December 1979.

In 1980, The Kennel Club became the first organisation to recognise agility as an ‘official sport’ with a sanctioned set of rules. The first agility test to be held under the new regulations was the team event at Crufts that year. The three teams to qualify after an eliminating round to compete in this event were Pontefract DTC, Yorkshire WTS and the Waldridge Fell TC.

1983 saw the founding of the Agility Club, the first national agility club in the UK, which also publishes Agility Voice, the first agility magazine.

Originally, all dogs – regardless of height – had to compete over the same 30″ jump height. This changed during the early 1980s with classes being introduced for Mini dogs (up to 15″ at the shoulder, jumping 15″). The first Mini Agility Dog of the Year competition took place at Olympia in December 1987.Classes for Midi dogs (15-17″ at the shoulder, jumping 20″) were introduced in the 1990s, although it was not until 2005 that they had their own competition at Olympia.

In 1992, the first week long agility show was held at Malvern by Dogs in Need, in aid of dog charities. A total of 885 dogs entered with 5,879 class entries. Dog agility has grown in the UK to the point where the most popular Kennel Club shows regularly run ten or more rings a day, with up to 450 runs in each ring.

Throughout the 1990s, dog agility in the UK was dominated by the Kennel Club. In 2003 the situation started to change with the appearance of shows run by East Midlands Dog Agility Club (EMDAC).

Non-KC agility shows increased from late 2003 onwards. Many of these were held by independent clubs as one-off events, but a number of agility organisations also started to be formed. These included UKA, Agility Addicts and It Barks, all of which were founded in 2004. In 2006, EMDAC launched the British Agility Association (BAA).

There are several different places where you can take your dog to train. Generally there are either KC Clubs or private clubs/trainers.

You could attend a class with (usually) no more than five or six in a class. Or you could have a one-to-one (individual) lesson. Not all clubs/trainers offer one-to-ones.

Safety: It is important to ensure that any training is carried out in a safe manner. As with any dog sport, injuries can happen when not trained correctly. Agility should be trained in the same way, whether you are planning on competing or not. You should never be doing all the equipment on your first lesson! A dog can easily be scared by doing equipment he has not been introduced to properly, eg seesaw.

Motivation: It should always be fun for the dogs. Handlers normally use toys as a reward so the dogs drive away from them. Learn to throw!

You will also need to have a reasonable level of control over your dog so he doesn’t chase the other dogs while training and has recall.

Your dog should be physically capable from both a conformation and fitness viewpoint. Some dogs are simply not built to complete an agility course. Your dog should also be reasonably fit as agility can be very demanding.

There are a variety of different organisations that organise agility competitions in the UK. Some of them are more prevalent in certain regions than others. In our area, the Kennel Club and UK Agility are the ones we see most of. Some of the FAB shows are within travelling distance. You are strongly advised to read the organisation’s website to familiarise yourself with the rules and regulations before entering a show.

The main ones are:

The Kennel Club (KC)
The KC are responsible for agility at Crufts, Discover Dogs, and Olympia
Rule changes are made via an advisory committee

Other organisations are privately run, so rule changes can be made relatively easily. All have their own qualifiers for finals, etc. There are others, but these are the main ones in our area:

Each organisation has its own grading structure and height splits. Height is measured to the top of the dog’s shoulder/withers.

It’s broadly the same in all the different organisations.

The photo gallery is KC standard obstacles as at March 2021. However occasional changes are made as standards evolve. 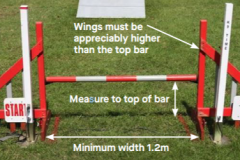 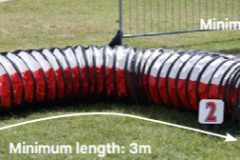 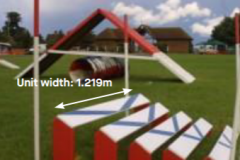 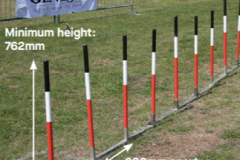 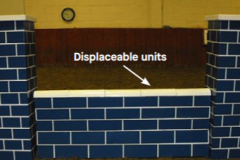 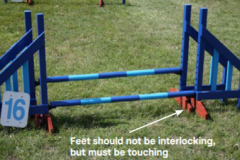 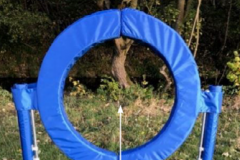 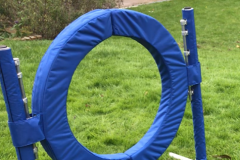 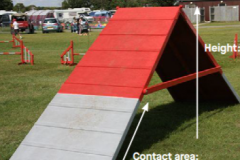 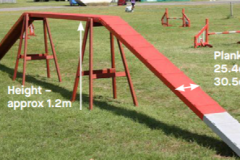 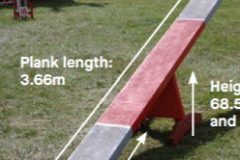 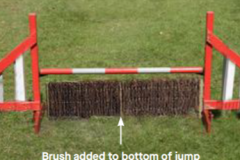 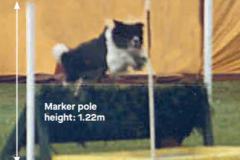 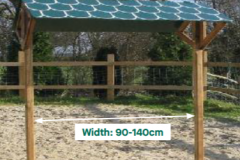 There are many different types of turns. They all have a name, such as Front Cross, Rear Cross, Blind, Ketschker, German… Which one you use depends on where you are and where the next obstacle is.

Here are some examples of courses. Click the thumbnails to view 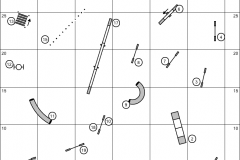 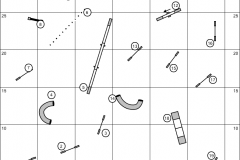 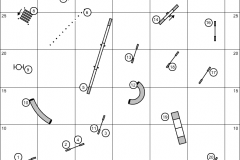 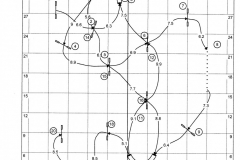 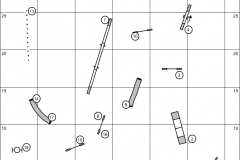 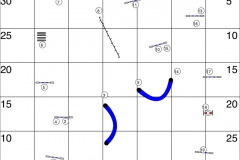 There are some differences between organisations, especially for refusals and minimum/maximum distance between obstacles, but mostly they are very similar

How to progress up the grades. It can be a little complicated in some organisations, so always best to read the rules! For instance you may be able to move up on points.

Handlers with Disabilities, and Juniors

Mostly handlers with disabilities compete in the same competitions as others, but there is also ParAgility. There is a ParAgility World Cup

Juniors are well catered for with separate competitions for Juniors in most organisations, including international. Different organisations have different age groups.

We use cookies on our website to give you the most relevant experience by remembering your preferences and repeat visits. By clicking “Accept”, you consent to the use of ALL the cookies.
Cookie settingsACCEPT
Manage consent

This website uses cookies to improve your experience while you navigate through the website. Out of these, the cookies that are categorized as necessary are stored on your browser as they are essential for the working of basic functionalities of the website. We also use third-party cookies that help us analyze and understand how you use this website. These cookies will be stored in your browser only with your consent. You also have the option to opt-out of these cookies. But opting out of some of these cookies may affect your browsing experience.
Necessary Always Enabled
Necessary cookies are absolutely essential for the website to function properly. These cookies ensure basic functionalities and security features of the website, anonymously.
Functional
Functional cookies help to perform certain functionalities like sharing the content of the website on social media platforms, collect feedbacks, and other third-party features.
Performance
Performance cookies are used to understand and analyze the key performance indexes of the website which helps in delivering a better user experience for the visitors.
Analytics
Analytical cookies are used to understand how visitors interact with the website. These cookies help provide information on metrics the number of visitors, bounce rate, traffic source, etc.
Advertisement
Advertisement cookies are used to provide visitors with relevant ads and marketing campaigns. These cookies track visitors across websites and collect information to provide customized ads.
Others
Other uncategorized cookies are those that are being analyzed and have not been classified into a category as yet.
SAVE & ACCEPT